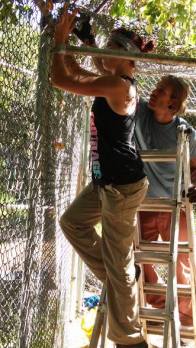 This started off as a Facebook post, but it is deserving of more. As a writer, I find some things shouldn’t be reduced to a Facebook status update, nor limited to 140 characters on Twitter, or become a caption typed beneath an Instagram photo. Some things are worth more than that. This is one of them.

I knew of your family since we were kids. My sister’s best friend happened to be your next door neighbor. Your other next door neighbor, was my Uncle Mike. I ran through the woods behind your house, replicating scenes straight from Jurassic Park. I carried my plastic Velociraptor everywhere. His name was Tori.

Everyone was scared of the wolf that lived in your backyard. I only pretended to be. I would watch her from the woods sometimes wishing I had a wolf of my own. Though most of the woods has been cut down and developed since then, it’s still the same place from my memory, the place where we take Layla for walks now, together.

My entire childhood was spent riding my bike, creating chalk art, rollerblading, eating ice cream and ice pops, wreaking havoc as this wily tomboy with scabbed up knees and dirt under her fingernails on the street that still connects to yours. We took a different bus to school. I knew your sister had a big brother but I didn’t know you yet.

As teenagers, you became the best friend of my best friend’s brother. We were together but separate in the same house for countless summer days and weekend nights. One summer, you convinced me and Katie to get drunk with you and Rich from homemade Long Island Iced Tea. We stowed away in Rich’s room, a forbidden place I passed by hundreds of times on my way to Katie’s room. I never had the privilege of entering. Rich put up a fight, not wanting to hang out with his younger sister. But you didn’t seem to care. I felt so cool when you asked us but I pretended it was no big deal. I pretended a lot back then. I was just a kid sister’s friend. Older brothers and their friends never asked younger sisters and their friends to hang out, let alone hang out and get drunk. Funny, you said you always thought I was too cool for you. I wasn’t.

In our 20’s, we spent long nights in Throop dive bars getting shitfaced together. We’d laugh, we’d sing, we’d shout about this and that over music and shots and beers that flowed like water. We always somehow stayed past closing time, just to get kicked out gently by the bar staff, still laughing and singing our way out the door. We went back to your house one of those nights and sat on your parent’s porch, not wanting the party to end. I mentioned I was hungry so you drove to get me the fast food. You knew I wasn’t going to make it much longer on the verge of drunken sleep, but you went for me anyway.

When I started The NOMAD Project, you messaged me. You were one of the first people to show up with donations to support its mission. I met you in the Dunkin Donuts parking lot. Your trunk was packed with everything I put on the wish list. I thought it was so sweet of you. You asked me to hang out sometime just like you had a few times before this day. I said sure, but I never called, just like I never called the other times I said I would. We didn’t see each other again for awhile after that, but I never forgot that day. I never forgot your thoughtfulness, your kindness, you wanting to help me help other people.

2016 was supposed to be better for me, better than 2015 was. It didn’t start out that way. In fact, most things were pretty fucking awful. So I told myself, this was it. Choose something that you want to do, and don’t let you having to do it by yourself be the reason that stops you. You have to get out there and live your life. Determined to change everything, some way, somehow, I signed up for a trip. Volunteering for others is something that makes me feel whole, regardless of what’s happening in my life. It’s not just about the “wanting” to give back to others, I feel like I “need” to. I have to leave the world a better place than how I found it, I just have to.

I was a member of The Sierra Club for several years. I followed their volunteer service trips annually. The year before, in 2015, I looked into this trip called Working With Wolves. Unfortunately, it had filled up almost right away and there was no room left when I inquired. But this year, miraculously, they offered it again. This was it. This was the thing I needed to do for myself, by myself. I sent my deposit and secured my spot. I’d be spending a week in the wild working on a wolf conservation with complete strangers to help with their mission to protect this endangered species. I’d be surrounded by wolves. Wolves. My dream come true. And I didn’t need anyone but myself to make it happen.

A few months before, the trip leader sent out a list of everything we should bring and directions on how to make it there. I printed it out. For whatever reason, you inspected the list of names that was on the email copied with me. You couldn’t believe it. My name was on it. You looked again. It can’t be. It was my name, right there, in black and white. Well god damn, you thought.

You messaged me to make sure it was really me.  It was. We talked up how strange it really was that we both signed up for the same random trip without knowing and then we decided to drive out together. We drove back together. And we’ve been together ever since. And this Friday, one year later, we’re leaving again for the same trip, only now we’ll be sharing a tent. Some days, I still have trouble wrapping my head around how all of this came together.

An hour after you dropped me off back at home when we returned from the trip, I messaged that I missed you already. I hit send and thought, “You fucking idiot, what is wrong with you? You’re going to look like a total weirdo.” I didn’t know what I was doing and I guess I didn’t care. It was the truth and I thought fuck it, you can’t go wrong with the truth. Just say it and whatever happens, happens.

You left to go on another trip the very next day. You were supposed to be gone for awhile, two or three weeks. You lasted a little over a week, messaging me to say you couldn’t stay any longer because you missed me. You came home on a Tuesday. It took all of my personal restraint not to tackle you in a bear hug when you walked through my front door. You didn’t know it yet, but I loved you then.

It felt as easy as breathing.

Life takes us here, there, and everywhere – all the while it teaches us what we are meant to learn about ourselves, about other people, about life, about love. Time and experience prepare us for what is yet to come and also for what we never saw coming.

I never saw this coming.

Funny, this life. It has a way of knowing exactly what you need before you do, and it knows when to save certain things for when you’re ready for them.

After 30 some years, we were finally ready.

I understand, now more than ever, why life plays out as it does, even when you feel like it has been working against you. Why some things you never thought would end, end. They must come to a close because something much greater is waiting for you, something you were meant for. It’s an alignment of stars. There’s nothing we can do about it but revel in the serendipitous nature of it all. And smile. And laugh. And love the shit out of each other and our life.

Because you are the best thing.

The something that was waiting for me.

And now, we both get to hold on to the one thing we kept on missing all these years…